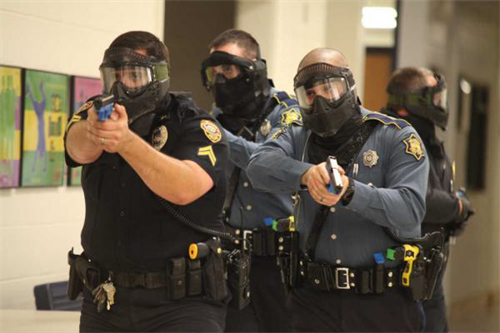 Those of you who know me well know that I am an extremely curious person and I am willing to try almost anything once. A few weeks ago a friend invited me to assist with an “active shooter” training for the cadets of a regional police academy. It was the first of such exercises that the cadets would attend, and this particular training was conducted by members of local SWAT teams. Our role was to help the instructors by creating realistic active shooter classroom scenarios in a Jefferson County school that is now used for training purposes only. We were advised that face and eye protection would be provided but to wear layers to protect our skin against the rubber bullets.

The scenarios started off pretty straightforward and grew in complexity as the cadets gained experience and confidence. We took turns playing the “bad guy” and it was exciting to both make yourself a target and shoot the non-lethal rounds at the police cadets. It was also rewarding to know that in some small way we were helping them to prepare for the unthinkable. I found it surprisingly difficult to hit moving targets under those conditions but it definitely got easier with practice and as my stress level dropped.

The final exercise simulated a hostage situation where the shooter warned the rescuers in no uncertain terms not to enter the classroom. Despite these clear warnings, each cadet team burst through the classroom door just as before to engage the shooter. In the chaos and excitement, at least one and often many of the hostage actors were inadvertently hit by friendly fire.

I spoke with one of the trainers after the exercise and specifically asked her about the hostage scenario. “Do the cadets ever negotiate with the shooter as they are instructed to in their earlier training?” “Almost never,” she answered. “That is why we always end with that exercise and it may be the best lesson of the night. In the stress and chaos of that scenario, teams typically fail to recognize the signals to shift away from offensive tactics to negotiation.”

I have the world of respect for anybody willing to put themselves in harm’s way to protect our kids and I thought all the cadets were competent. I was reminded of how difficult it is to respond appropriately to very stressful and unfamiliar situations, even with a lot of practice. With no preparation or training you are almost certainly going to perform poorly. I was also reminded of a terrible phone call I got about another improbable and stressful situation involving an old friend.

In mid-October one of my RPI fraternity brothers called from the home of the widow of a mutual friend who died unexpectedly a month earlier. He was a healthy family man and had left town on a routine business trip and succumbed to an undiagnosed medical condition on his way home. He was a good man and had responsibly planned for adequate life insurance for his family’s security. Unfortunately, he had never completed a will and he left without providing his stay-at-home wife with any instructions or guidance whatsoever to help her figure out how to organize their finances to meet the family’s financial obligations and ensure her secure retirement. He was 45 years old.

If you knew for certain that you would die prematurely of course you would complete a will and put tremendous thought into it. You might even take the time to write letters for your kids for them to open at key moments of their lives such as their college graduation, first real job, marriage, and the birth of their first child. You would do everything in your power to make sure that your family would be OK without you and that there would be the right people around to come alongside them when you could not. If you knew that your spouse would die with you and you had kids at home, you wouldn’t rest until you had identified the best guardian and the best trustee, and you would spend all the time needed to work with those two to make sure they understood what was important to you and how you wanted your kids raised.

One of my friends who is in his early 50s had a mild heart attack earlier this year and it was a major wake-up call for him, and inspired him to go through a process he calls, “The Ultimate Dress Rehearsal.” He convened his team of advisors and they spent an entire weekend going through exactly who would do what and how, should he die prematurely. His wife is not much involved in their financial matters and this gave her the opportunity to meet the team and ask any questions that she had. By the end of the weekend they had created a comprehensive strategy to make sure all his affairs would be properly taken care of.

We are highly motivated by these recent events and are rolling a version of this Ultimate Dress Rehearsal process out to our clients that can be done in stages, as time allows. We are leveraging a world-class platform called Everplans https://www.everplans.com/, which provides a checklist-oriented process that we walk our clients through to prepare them for the unthinkable. If you are curious to look into this, please call Jenny at 303.900.4018 to schedule a conversation or visit us at http://stewardshipcolorado.com to learn more.