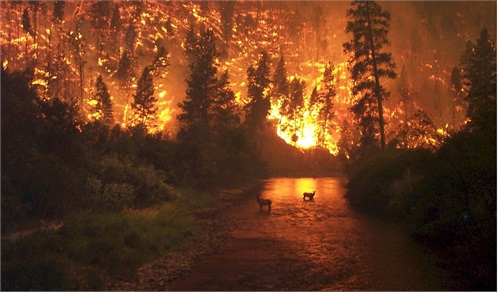 The Markets: What to Do?

I have been an Evergreen Volunteer Firefighter since 1995 and a big part of the work we do involves preparing for and fighting wildland fire.  In 1997 I was at a corporate retreat in Glenwood Springs and I woke up well before dawn to run up nearby Storm King Mountain to the South Canyon Fire memorial where 3 years earlier 14 fellow firefighters had lost their lives.  I experienced sunrise alone at the site where those 14 lost their fight with a relatively small fire that was not threatening any structures.  The South Canyon tragedy led to the first comprehensive review and update of Federal wildland fire policy in decades.

One of the interesting things I have learned about firefighting is that what are considered “best practices” is a moving target.  In some cases in my 20 year career we have completely gone away from using a particular technique only to return to it some years later and the same is true on a larger scale.

Yellowstone National Park was established as our very first national park in 1872 and in 1886 the US Army arrived to assign patrols to guard against fires, livestock trespass, and illegal logging.  1910 was a catastrophic wildland fire season - the Devil’s Broom Fire alone burned over 3 million acres in Washington, Idaho and Montana and killed 87 people, mostly firefighters.  At this point the US Forest Service and the National Park Service made it a priority to suppress ALL wildfires and they were highly successful.  Due to their efforts the area burned annually by wildfires was reduced from an average of 30 million acres to between 2 and 5 million.

As early as 1924 environmentalist Aldo Leopold argued that wildfires were beneficial to ecosystems, and were necessary to clear out the underbrush and for the natural propagation of numerous tree and plant species.  Over the next 40 years, increasing numbers of foresters and ecologists concurred and by the 1960s they realized that no new Giant Sequoia had grown in the forests of California in decades due to the policy of extinguishing all forest fires.

The passage of the 1964 Wilderness Act brought in a new philosophy of allowing wildfires that were not threatening structures to burn naturally.  This policy continued until 1988 when another period of very dry and hot weather at Yellowstone allowed many smaller fires to eventually join, creating dangerous firestorms that burned out of control for months and ultimately burned nearly 800,000 acres (36%) of the park.  Policy shifted again after the 1988 fire season to more aggressively fight wildland fire, particularly if they were anywhere near population centers.  It was this more aggressive stance that in part that put those 14 in harm’s way on Storm King Mountain in the summer of 1994.

Fighting wildland fires is probably the most dangerous and demanding job that we face as firefighters and when accident investigations are conducted the one common factor that is almost always mentioned is “lack of situational awareness”.  That usually means that the firefighters in the heat of battle were spending too much of their energy focusing on what was happening right in their immediate surroundings and they missed the critical view of the larger picture.

The Safety Lookout is an absolutely essential role that needs to be filled on every fire with a highly experienced and clearheaded firefighter.  Their job is to position themselves in a safe location away from the smoke and flames where they have a clear view of the teams on the ground, the air operations and ideally the escape routes and safety zones as well.  One of the most important roles we play for our clients is very similar – to help our clients not lose sight of the big picture and to help prevent them from making short-term decisions that lack the context of their overall goals and vision.

Another very important role we play, as Investment Advisor Representatives of Stewardship Advisory Group, LLC, is to work with our clients to create financial plans that will meet their goals in any anticipated market condition.  This provides the context mentioned above along with strategies that we mutually agree on in advance rather than making it up as we go based on the news of the day.  Of course we are prepared to make the course corrections needed as circumstances change and as the markets present us with opportunities.  While everyone’s situation is unique, there are some timeless themes that run across the plans we put together for our clients:

If you are interested in getting more of our thoughts on recent events please call Jenny at 303.900.4018 to schedule a conversation or visit us at http://stewardshipcolorado.com to learn more.