2017 was an extraordinary year in financial markets, yet the most popular financial story was bitcoin. Not the fact that U.S. financial markets gained every single month. Or its amazing steadiness with only eight trading days where the markets gained or lost over one percent. Only eight! The most sweeping tax reform since 1986 was also not the big story of 2017.

I have cautioned in the past to be careful about what financial news you consume, especially the 24-hour news that appears on the internet and cable channels. Some of the headlines this past week were hysterical, talking about the two largest drops in the market ever. While that statement is true in one sense, it’s also highly misleading because with the Dow trading at 25,000, 1,000 points is only 4 percent. In 1987, the Dow dropped exactly 508 points, which, at the time, was a 22.61 percent drop in a single day.

Here are some themes to consider when you create your own expectations of what the financial markets will do in 2018:

Over the past 22 years, the market has an average of 70 days with a 1 percent or greater move. 2017 did not have even a single drop of over 3 percent, so the 10-plus percent drop so far in February is not unusual, nor would additional drops of that magnitude be this year. 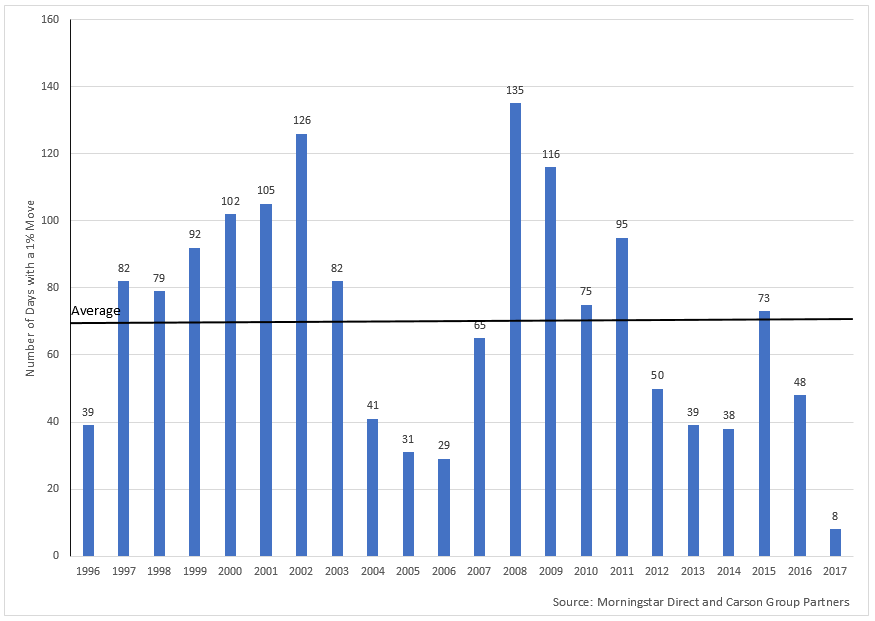 Overseas markets are currently trading at significantly lower valuations than the U.S.

Supporters of active investment management often tout the manager’s ability to protect capital and outperform during down markets. The data shows in the last two bear markets, only Large Value funds outperformed their benchmarks (https://bloom.bg/2BYRuga): 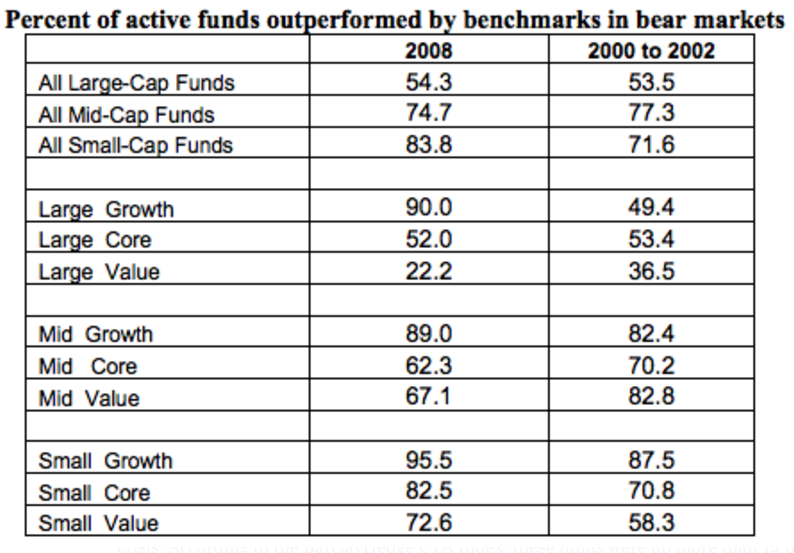 Acknowledging and analyzing your reaction to this recent high market volatility can be invaluable. It is one thing to complete a hypothetical risk survey in a warm comfortable office with calm rising markets, and quite another to watch meaningful amounts of your wealth disappear in a few days. If the recent market volatility has you really worried, that may be a sign that you would benefit from clarifying your beliefs about investing and making sure your beliefs align with your strategies.

2. Short-term trading is a losing game

4. Minimizing investment and tax costs is the easiest way to boost returns

The best way to build an efficient portfolio is to overweight asset classes (the broad categories of investments comprise your portfolio) with higher future expected rates of return and include asset classes that react differently (low correlations) to limit drawdowns. This is easier said than done and we have spent years refining a repeatable and consistent allocation process.

We settled on BlackRock’s Aladdin (Asset Liability and Debt and Derivative Investment Network) risk platform to create our global allocation models. Aladdin gives us rigorous quantification of risk and also provides scenario forecasts to predict how portfolios would react to a 2008 market crash scenario or rising interest rates. Aladdin was actually used in 2008 by the U.S. Federal Reserve when it took on the assets of Bear Stearns, and then by the U.S. Treasury to rescue the financial system. During the European debt crisis, Aladdin was hired by the central banks of Ireland, Greece and the ECB. You can learn more about Aladdin in the December 26, 2017 issue of Forbes.

Every basic financial plan is based on having an appropriate amount of liquidity, even if it is rarely called that. The first step of many debt elimination programs is to create a savings account with $1,000 in it called an “emergency fund,” although liquidity is not just for emergencies. Once these savings are set aside, attention is then directed toward the elimination of all unsecured debt such as credit cards and loans, and then the focus is returned to increasing liquid savings, usually to between 3 and 12 months of living expenses for people in their working years.

I often hear objections to having tens of thousands of dollars sitting in the bank getting low returns, but during times like this, that liquidity protects you from having to sell any of your long-term investments, which can provide the confidence to be able to patiently ride out the market swings. Can you imagine how a debt free investor with a year of living expenses in the bank would view this market volatility differently than a heavily indebted investor who had 100 percent of their savings invested in the market?

Time for a Portfolio Review?

If you are overly concerned or even terrified at what has happened recently in the markets, that may be an indicator that you have not properly invested your portfolio. We would be happy to give you a complimentary review of your portfolio including both allocation analysis and stress testing it using Aladdin. We always offer an introductory meeting at no charge to allow you to ask us anything that is on your mind and get to know us better.