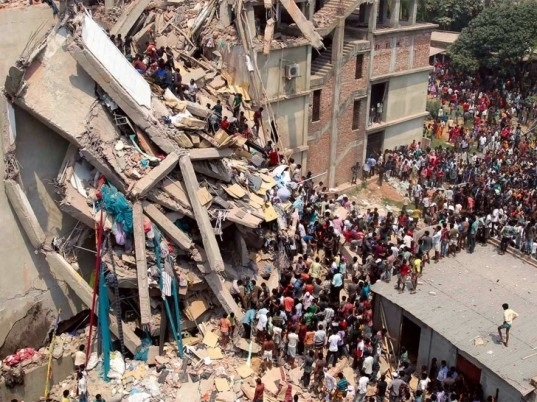 Invest to Love Your Neighbor

Last year was very tumultuous in many respects, and at times, the streets were filled with angry protesters. Many Americans stood up to advocate for their fellow man and woman here in the United States. Americans also expressed their values in what they bought, some preferring non-GMO products and driving electric vehicles. This emerging alignment between our values and actions is only starting to expand into how we invest, but that is changing fast.

The price of clothing has been decreasing for decades, while the human and environmental costs have grown dramatically. On April 24, 2013, an eight-story building called Rana Plaza collapsed in Dhaka, Bangladesh, killing 1,132 people and injuring more than 2,500 others. Rana Plaza housed five garment factories that produced clothing under well-known labels from the United States and Europe. The office building was not designed to accommodate heavy equipment and just days before it collapsed, cracks had appeared in the concrete. An engineer declared the building unsafe, but managers sent workers back to the machines, partially due to the pressure to complete orders on time to meet short production deadlines.

Andrew Morgan created an eye-opening documentary in 2015 called “The True Cost” about the business practices and human costs behind “fast fashion,” which is the term used to describe the mass production of high fashion at low cost. I watched the documentary and was absolutely horrified to learn of some of the negative impacts that our insatiable desire for cheap goods generates. Workers all around the developing world are trapped in what is essentially modern slavery, working in dangerous environments for a pittance. Garment workers in Cambodia went on strike in 2014 for what they considered to be a “living wage” of $160 per month—around $1 per hour—and their requests were met with violence from factory owners and the police.

At the time of the documentary, the hundreds of leather tanneries in Kanpur, India dumped 50 million liters of toxic water per day that caused nearby wells to produce neon green water, contaminated with the cancer-causing heavy metal, Hexavalent Chromium. Cheap cotton in India is grown using toxic pesticides and harsh fertilizers that also contaminate their water, and the hardball business practices of seed and chemical distributors has caused an epidemic in farmer suicides, often by drinking pesticides due to their inability to repay loans.

These tragedies unfold daily in parts of the world that don’t yet have the environmental and human protections that we enjoy here in the United States. When we buy fast fashion, we create more human suffering and environmental catastrophe. As bad as that is, I believe that it is even worse to supply capital to the companies that engage in these business practices by buying their stocks and sharing in the ill-gotten profits they generate.

Most stock investors have no idea what stocks they own because they own them indirectly through mutual funds that either track indexes or are managed by professionals who generally make investment decisions with the bottom line in mind: profits. Investors are in some ways like fictional mob boss Tony Soprano’s wife Carmela, who lived in a mansion and enjoyed a lavish lifestyle with expensive cars, vacations and private schools for the kids. She never asked questions about what activities generated the profits she enjoyed or who suffered to make her lifestyle possible.

Early socially responsible investing (SRI) focused on identifying and eliminating companies that engaged in practices that harmed the company’s stakeholders. Stakeholders can be broken down into six groups:

This approach was often implemented by identifying certain industries to target for elimination from portfolios such as:

Screened portfolios have similar long-term risk and performance characteristics to traditional portfolios but you, as the owner, can sleep better at night.

Modern values-based investing has moved beyond harm avoidance to embrace companies that care as much about people as profits and actually create value for their stakeholders instead of destroying it. We anticipate superior investments in value-generating companies at the intersection of positive secular growth trends (such as autonomous vehicles and 5G network rollout) with themes of human flourishing.
Examples:

One measure of customer satisfaction is Net Promoter Score (NPS), which ranges from -100 to 100. Increasing NPS by 12 points (6 percent) correlates with doubling company growth rates and profitability into the future! Companies that consistently create value for their stakeholders also create more value for shareholders. Portfolios built with these companies have the potential to not only avoid harm and create value but also improve both long-term risk and performance characteristics as compared to traditional portfolios.

A leader in the sustainable ETF market recently provided metrics around the reduced environmental impacts associated with their sustainable portfolios. Investing $1M into their low carbon target ETF reduces the investment carbon footprint by 60 percent equates to a reduction of 94 tons of annual CO2 equivalents which equates to 10,577 gallons of gasoline burned or 103,575 pounds of coal burned.

I will revisit values-based investing in the near future to offer advice on how you can better understand what you currently own and how your investments are impacting people and the environment in the developing world and at home. I will also share some practical strategies on how to better align your investments with your own values to make it possible for you to invest in ways to not only avoid harm but truly love your neighbor by making our world a better place.