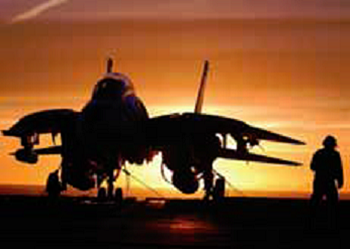 Find the Ace of the Base

We will be writing a financial article every month this year and are starting off with the very interesting life story of John Ramstead. John is a former U.S. Navy F-14 carrier pilot who served on the USS Independence and flew combat missions over Iraq in the first Gulf War. John and I first met at Rensselaer Polytechnic Institute (RPI) where we both studied Electrical Engineering. John was there on a Navy ROTC scholarship and came from a military family—his grandfather fought for America in WW1, enlisting only a year after emigrating from Norway, and his father served in WW2 in the Pacific as a radioman and tail gunner in the PBY Catalina search and rescue seaplane. From a very young age, John dreamed of following in their footsteps and specifically of becoming a U.S. Navy aircraft carrier fighter pilot.

John's dream was shaken at RPI when it came time to request his specialty from the Navy. The representative from Navy aviation announced that for every 10,000 who applied to aviation, only a single one would end up in the cockpit of a Navy jet fighter. At the time, John did not yet see himself as that person, and he decided to apply instead for submarines in the Navy nuclear program where he could serve out his commitment and begin a lucrative civilian career in nuclear engineering.

While my other friends and I were doing summer internships at places like Jet Propulsion Labs in Pasadena, GE or IBM, John took a cruise aboard a nuclear submarine between his Junior and Senior years. The bunks were not designed for people over 6 feet and there was not much else that he liked about life on the sub. When he returned from the cruise, he immediately requested to take the entrance exams for aviation and did well enough to gain admission to the Navy flight program.

After John graduated, and before he left for Pensacola, his father pulled him aside and gave him some fantastic advice. His dad told him that when he got to Pensacola there would be one student at the top of the class ahead of his—the "ace of the base." That student would be doing things differently than everyone else, and learning those strategies could provide the edge needed to move on to the next level.

That pilot was named John Foster. Since they were not in competition with each other, he was happy to share his knowledge and wisdom, and they became good friends. Foster believed that the number one rated pilots were not the most gifted aviators; they were the best students who could leverage their knowledge and training under the most difficult circumstances in the air. Foster's unique training regimen involved juggling balls while his girlfriend would quiz him on emergency procedures and other relevant facts using flashcards that he had prepared. When he made an error, he would start all over. John adopted his strategies and also adopted Foster's habit of reaching out to the top pilots in the classes ahead of his to find out exactly what their instructors expected and how they conducted their drills. Armed with this knowledge, John prepared better than his competitors. Subsequently, he finished number one in primary flight training, number one in intermediate jets, number one in advanced jets and number one in carrier operations and was given his choice to fly F-14s in a carrier squadron.

After his combat tours in Desert Storm and Southern Watch, John was selected as the one pilot from his squadron to go to Top Gun —the rest of his amazing story can be heard by clicking here. http://bit.ly/1wJY1DL.

We at Stewardship Colorado have learned these same lessons—to humbly seek the wisdom and knowledge of other financial aces who are ahead. We spend a great deal of time learning from and partnering with ace investment managers who focus on creating exceptional value for their clients.

Many investors don't have any strategy or edge and switch from one 'hot' investment to the next which often produces poor long-term returns, excessive fees and unnecessary taxes. We believe successful financial aces share these traits:

Having an investment strategy that you understand and have faith in gives you the confidence to enjoy what Albert Einstein referred to as the "eighth wonder of the world"—compounded returns. This is one of the main areas where we help our clients. Email us to learn more about Sean Wood's investment philosophy and services.